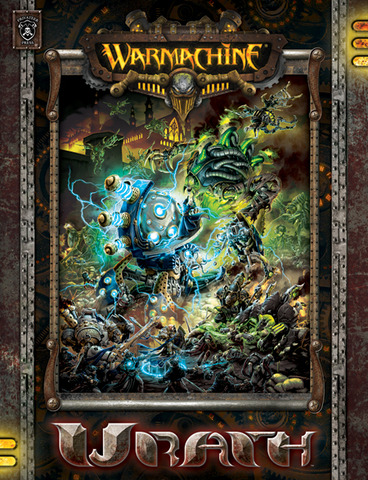 Fuel the Engines of War!

As the fury of war shatters the fragile peace following the events of WARMACHINE: Legends, the nations of the Iron Kingdoms prepare to unleash new weapons against their foes. While old grudges bring about new hostilities, a sinister force prepares to cast its shadow across all of Immoren as events unfold that will change the Iron Kingdoms forever!

WARMACHINE: Wrath heralds the next exciting chapter of the WARMACHINE saga. Lead the charge to war with:

• New troops to bring to the fight, including six new warcasters and the debut of the mighty battle engines.

• New narrative fiction, including compelling stories for each WARMACHINE faction.

• A painting and modeling guide to help you ready your forces for battle.

• New Theme Force lists for each new warcaster, which allow you to create armies based on specialized forces found in the WARMACHINE world.